The Los Angeles Master Chorale's 21-member Lagrime di San Pietro touring company, Grant Gershon, Peter Sellars, and the tour crew traversed two continents in May 2019 with performances in Berkeley, London, Gateshead, Paris, and Santa Fe. Here we revisit some of the highlights and reactions from audiences.

Next stop: the Salzburg Festival in July!

Renaissance Amongst the Redwoods

The tour began close to home with a performance presented by Cal Performances at Zellerbach Hall at the beautiful redwood-strewn campus of the University of California, Berkeley on May 17. 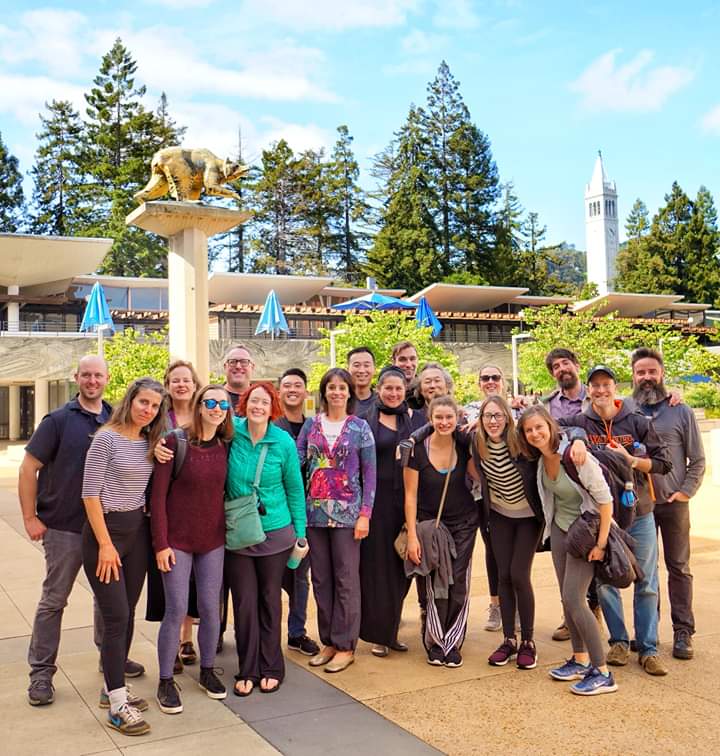 The Lagrime company at the University of California, Berkeley. Photo by Matt Brown.

The performance received an enthusiastic standing ovation from the audience, providing a great boost to the start of the tour. The audience included composer John Adams, restaurateur Alice Waters, and conductor Nicholas McGegan.


"This Lagrime was theatrically, poetically, and musically gripping, delving into the work’s
emotionality with unabashed commitment."
San Francisco Classical Voice

"What truly mesmerized me was the total commitment of the 21 singers to this production."
Parterre Box

Polyphony in the UK - Part I

The company then departed for Europe with the first stop being London, England for a performance presented by the Barbican Centre in Barbican Hall on May 23.

Prior to the concert day, 16 members of the company and Grant Gershon, Kiki & David Gindler Artistic Director, performed live from the BBC's Broadcasting House for an episode of BBC Radio 3's "In Tune" program. In addition to singing three excerpts from Lagrime, Grant, soprano Andrea Zomorodian, and tenor Shawn Kirchner were interviewed by host Katie Derham.


LISTEN TO THE EPISODE 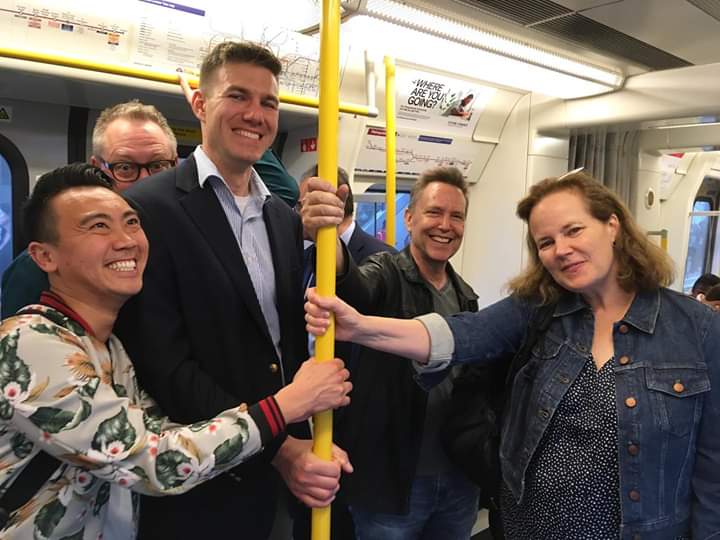 How do you get to the BBC? The Tube! Photo by Andrea Zomorodian. 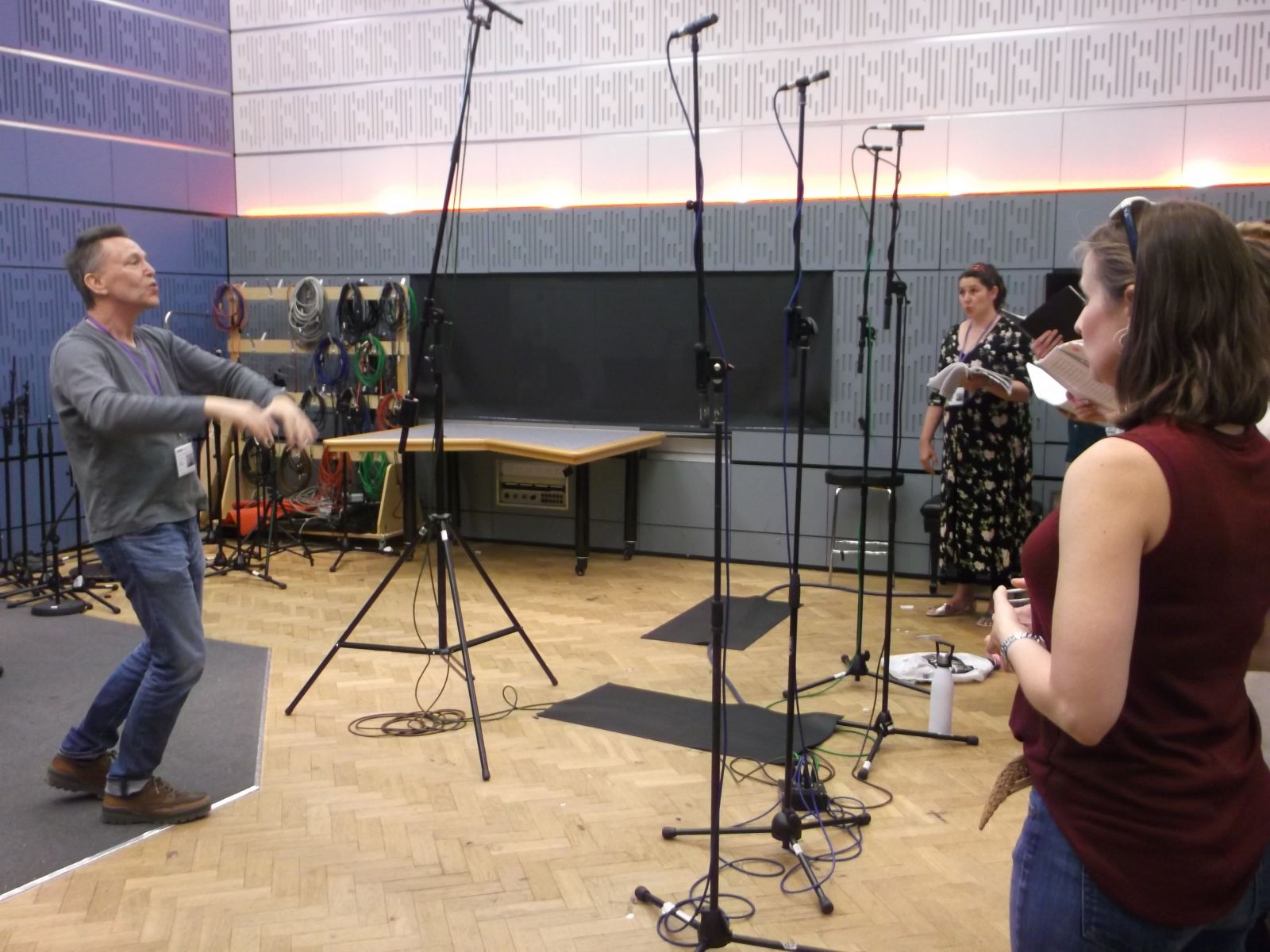 Rehearsing in the BBC Radio 3 studio. 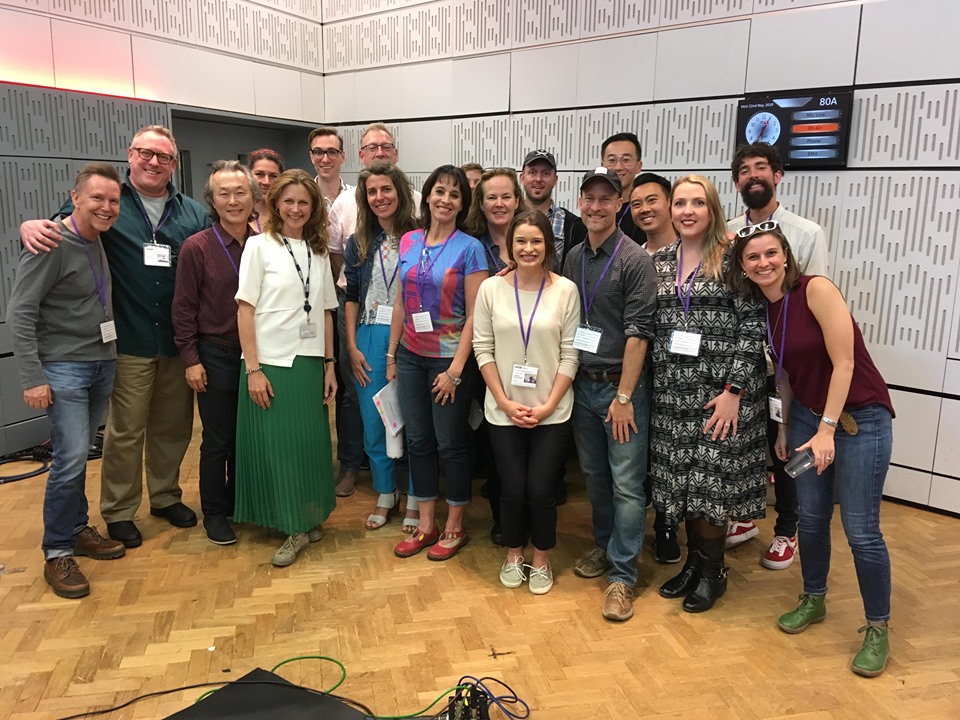 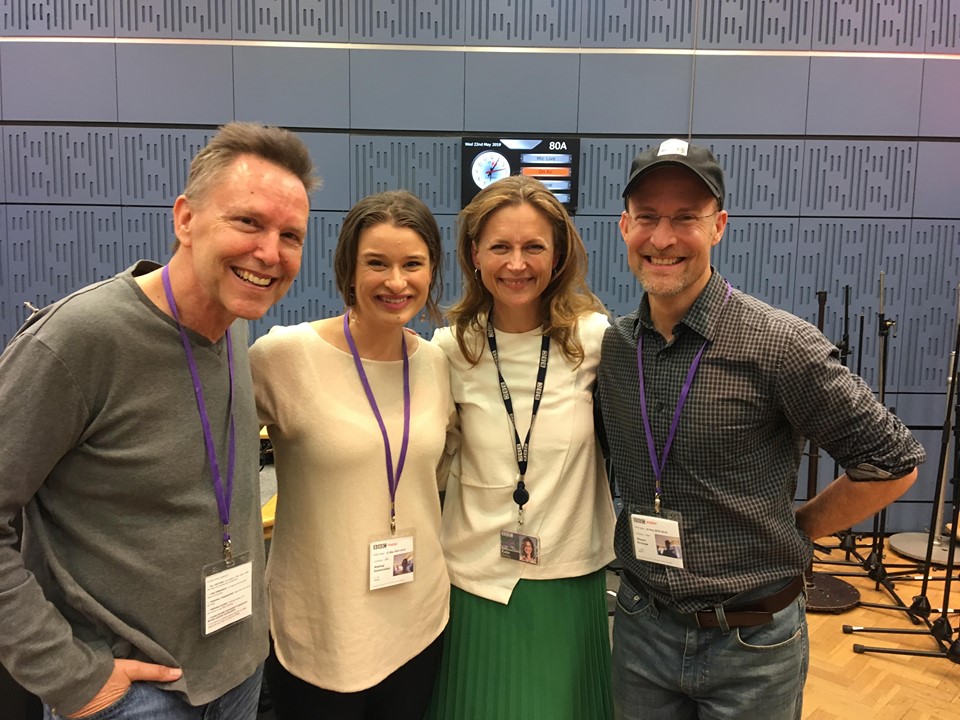 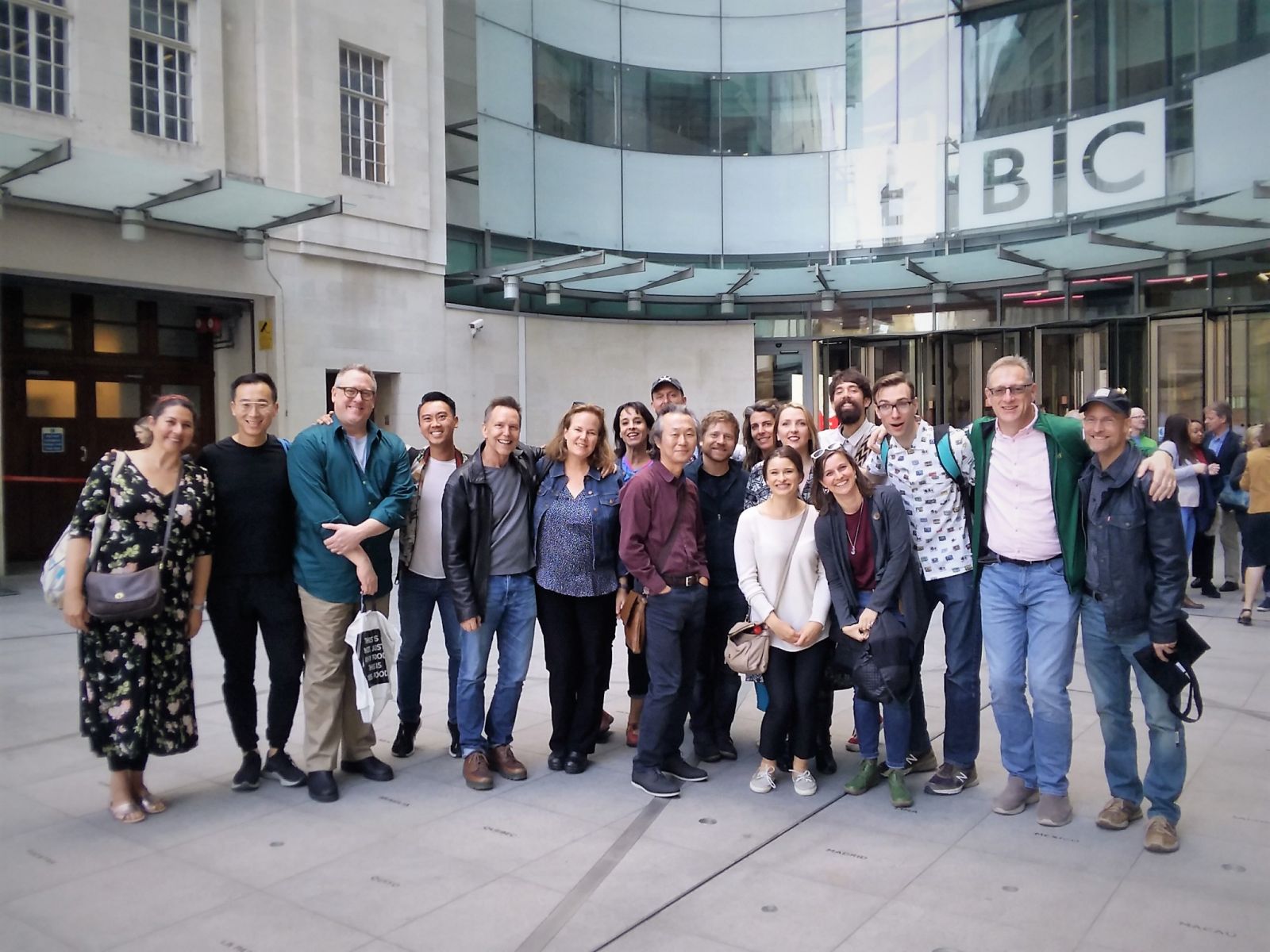 On the same day as the BBC appearance, soprano Dr. Claire Fedoruk made a special day trip to Newcastle  to present a paper called "Transforming Narrative Through Performance: The Lagrime di San Pietro" at Newcastle University. She was an invited guest lecturer for the University's research quorum and the invitation was timed to coincide with the Lagrime performance at Sage Gateshead. Claire is a scholar-practitioner whose research is focused on vocal music of the Renaissance and twenty-first centuries, and whose passion is the intersection of scholarship and performance and its impact on those who practice both. 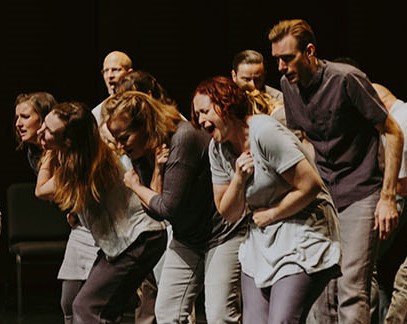 The following day was performance day at the Barbican Centre in Barbican Hall. 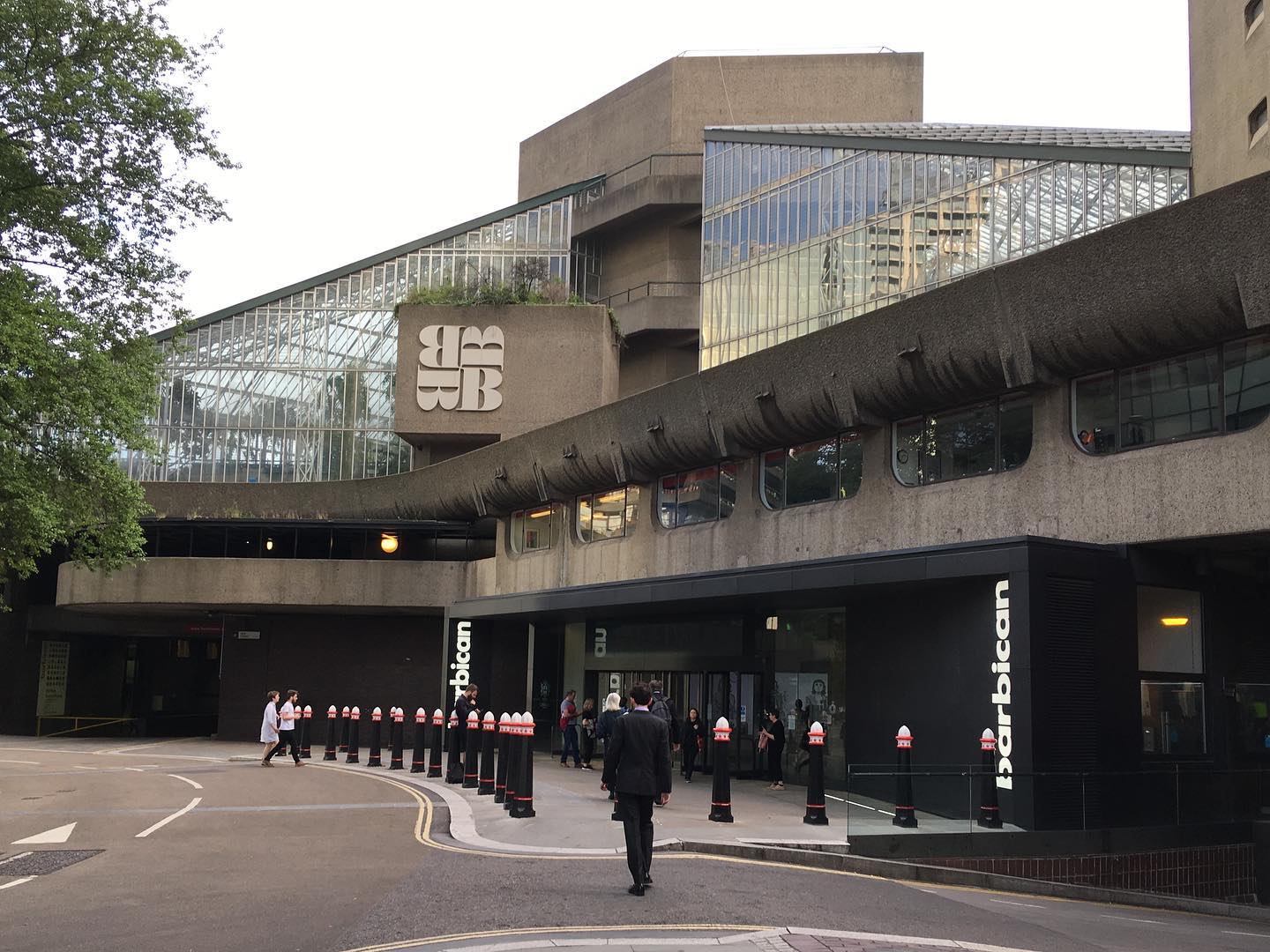 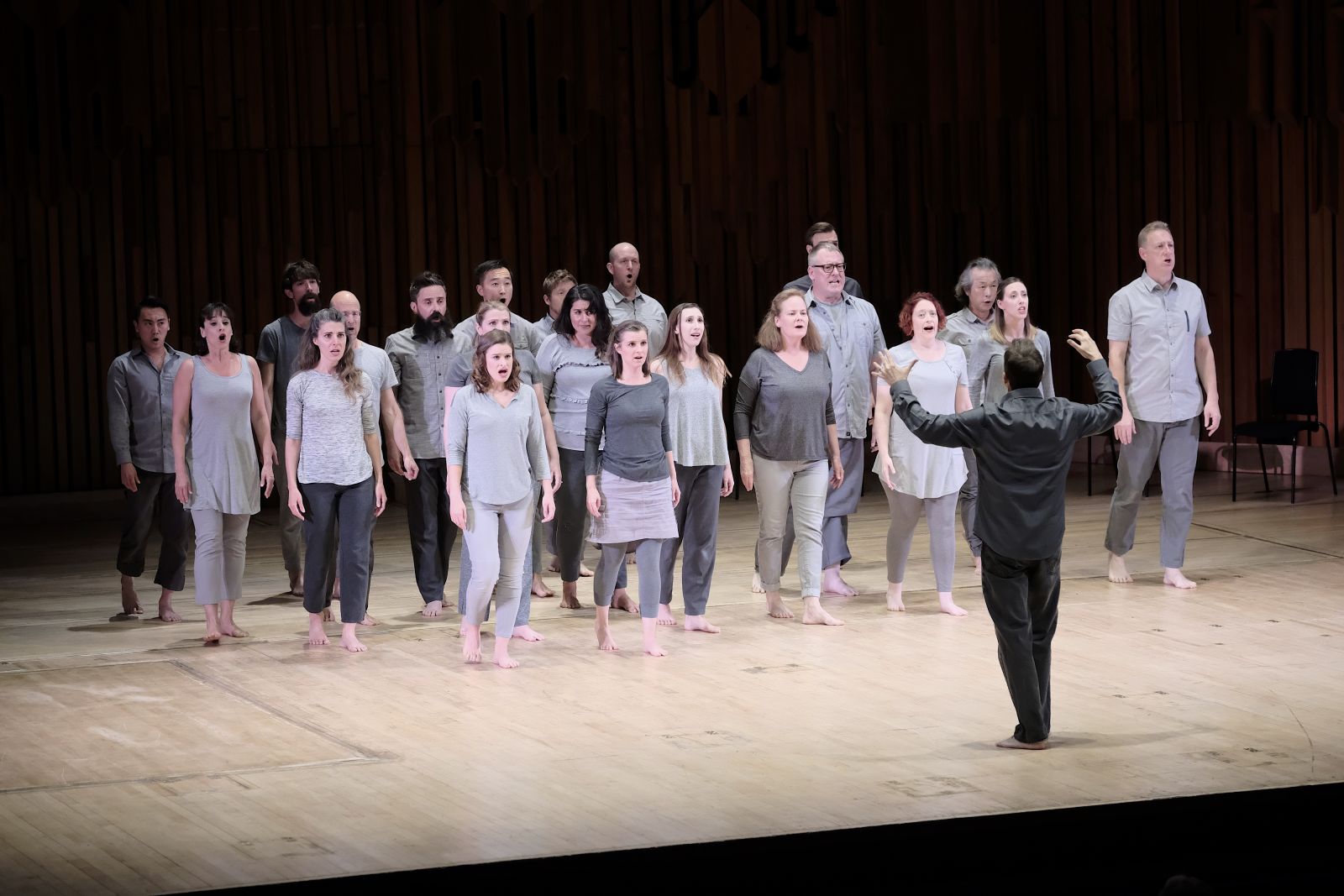 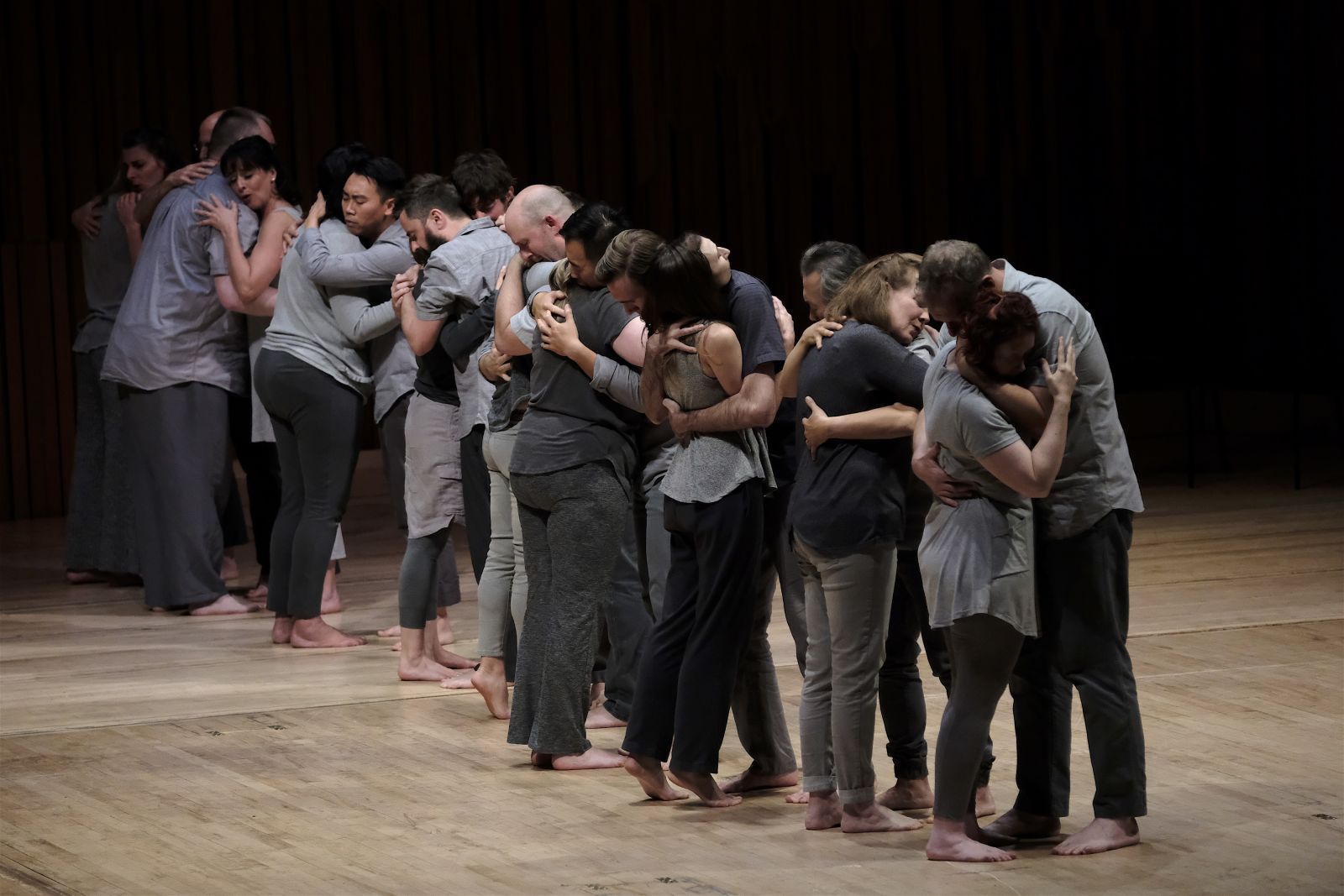 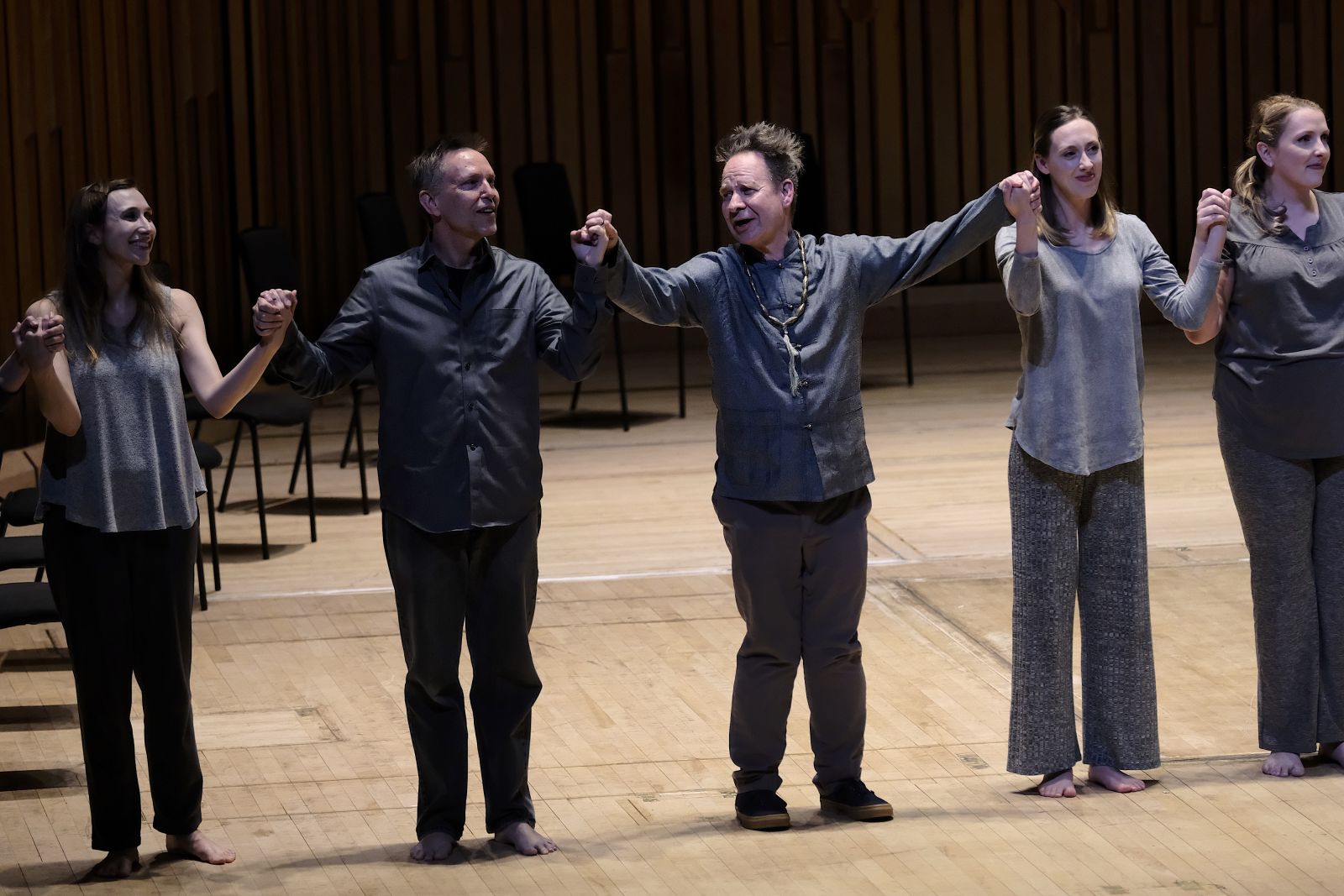 The audience included many family members of the singers and touring crew, who had made the trip to see this special London performance, giving the evening a wonderful, warm feeling. Grant Gershon also revealed that the audience included famed soprano, Dame Emma Kirkby, one of the world's most renowned early music specialists.

Some of the audience reactions were expressed on Twitter:

Bravo @LAMasterChorale! Mesmeric performance of one of my desert island pieces. The Sellars magic still very much enduring. https://t.co/RPapucLiOV

Memorable Lasso’s Lagrime di San Pietro (Tears of St Peter) from @LAMasterChorale under @GrantGershon1 and directed by Peter Sellars at @BarbicanCentre. An extraordinary performance beyond the wonderful singing. Full of commitment, emotion and humanity. pic.twitter.com/9nsxA9xJmp

Bravo @LAMasterChorale! The perfect blend of perfect blend, exquisite gesture & an astonishing feat of memorisation. Peter Sellar’s direction was predictably perfect - drawing one into the humanity of the story whilst serving the music superbly. Such a moving performance. https://t.co/se152y6m3x

And from the reviewers:

"To commit 80 minutes of 16th-century seven-part polyphony entirely to memory, then sing it with perfect intonation almost defies belief."
The Times

"On the day of the European Union elections, to see Peter Sellars’ staged version of an a cappella Renaissance choral work, Orlando di Lasso’s Lagrime di San Pietro (Tears of St Peter), was balm for the soul."
The Stage

"... it achieved a synthesis of words and music with a penetration that left you reeling."
Classical Source


Polyphony in the UK - Part II

The following day the company headed to King's Cross station where, despite being tempted to take Platform 9 3/4 to Hogwarts, it instead boarded the Edinburgh-bound train to Newcastle for a performance at Sage Gateshead on May 25. 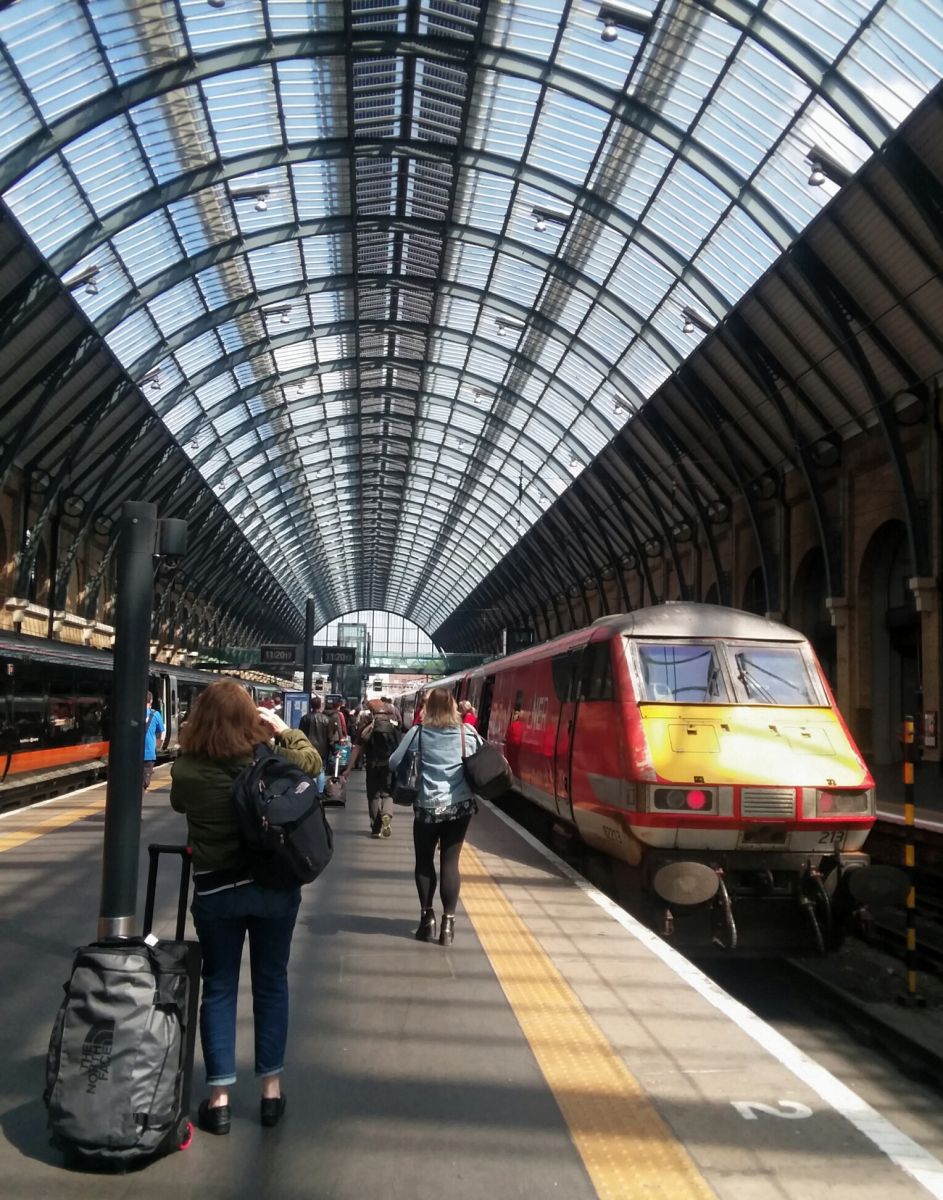 Catching the train to Newcastle at King's Cross Station.

Located across the River Tyne from Newcastle in the Gateshead Quays area, the Sage Gateshead is a truly magnificent performing arts center and it was obvious from every interaction with locals just how proud of it they are. Spectacular by both day and night, the illuminations after dark on the building are designed to make it look as though three steamer ships are sailing up the river. From the bus ride to the hotel and throughout the two days spent in the area, Northen hospitality was on display and there was an exceptionally friendly, welcoming feeling that extended to the performance and a standing ovation from the audience. 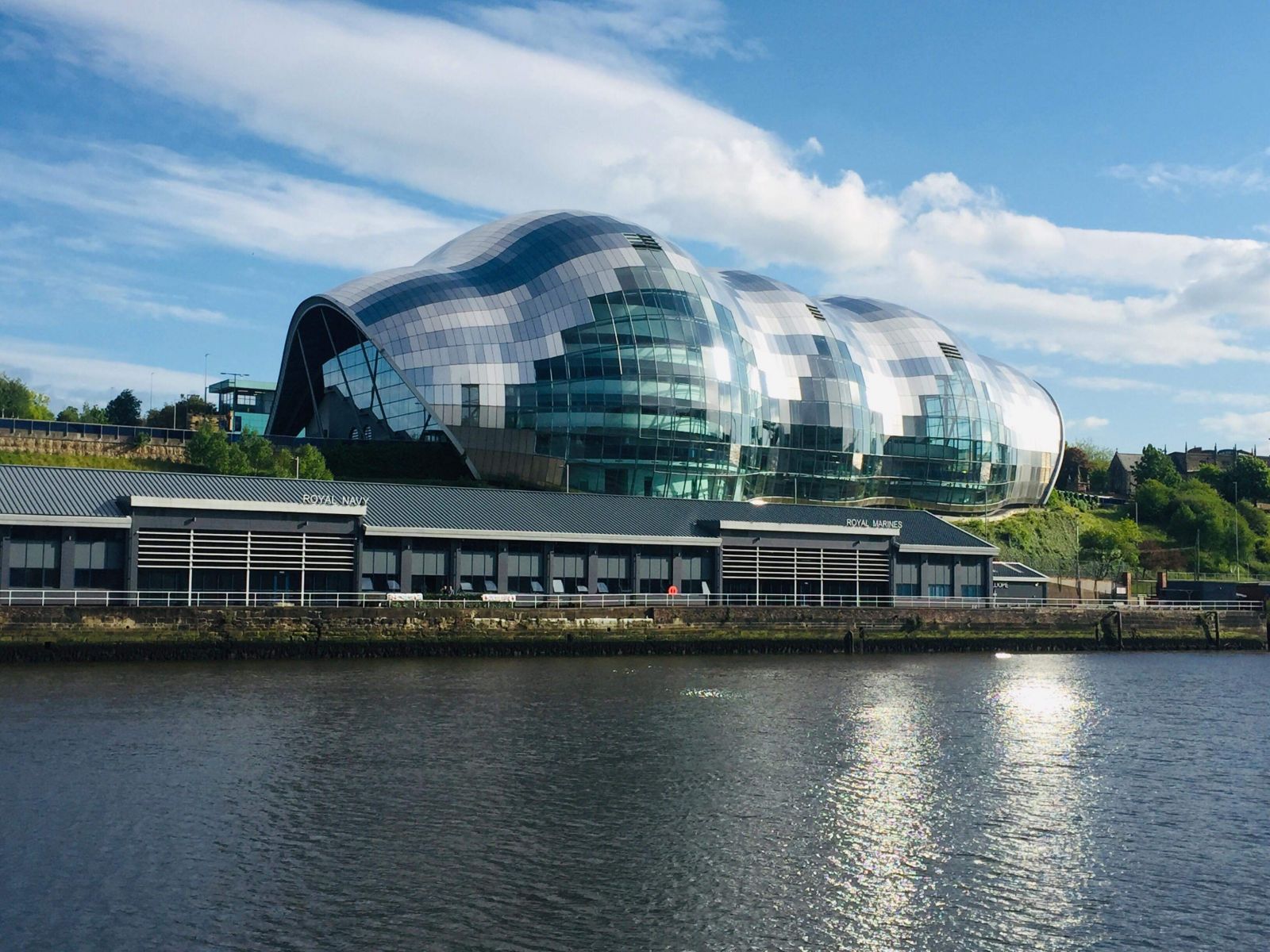 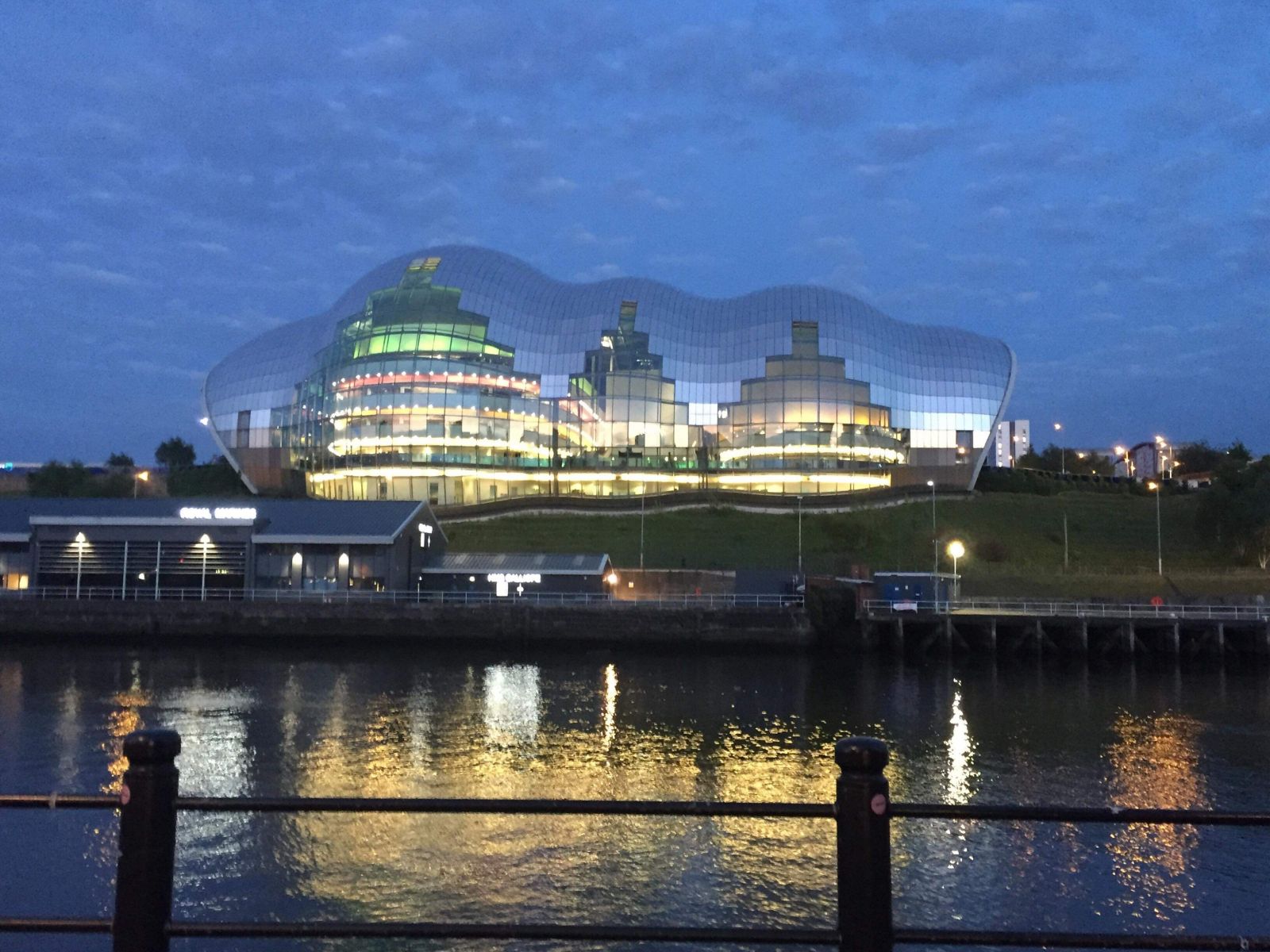 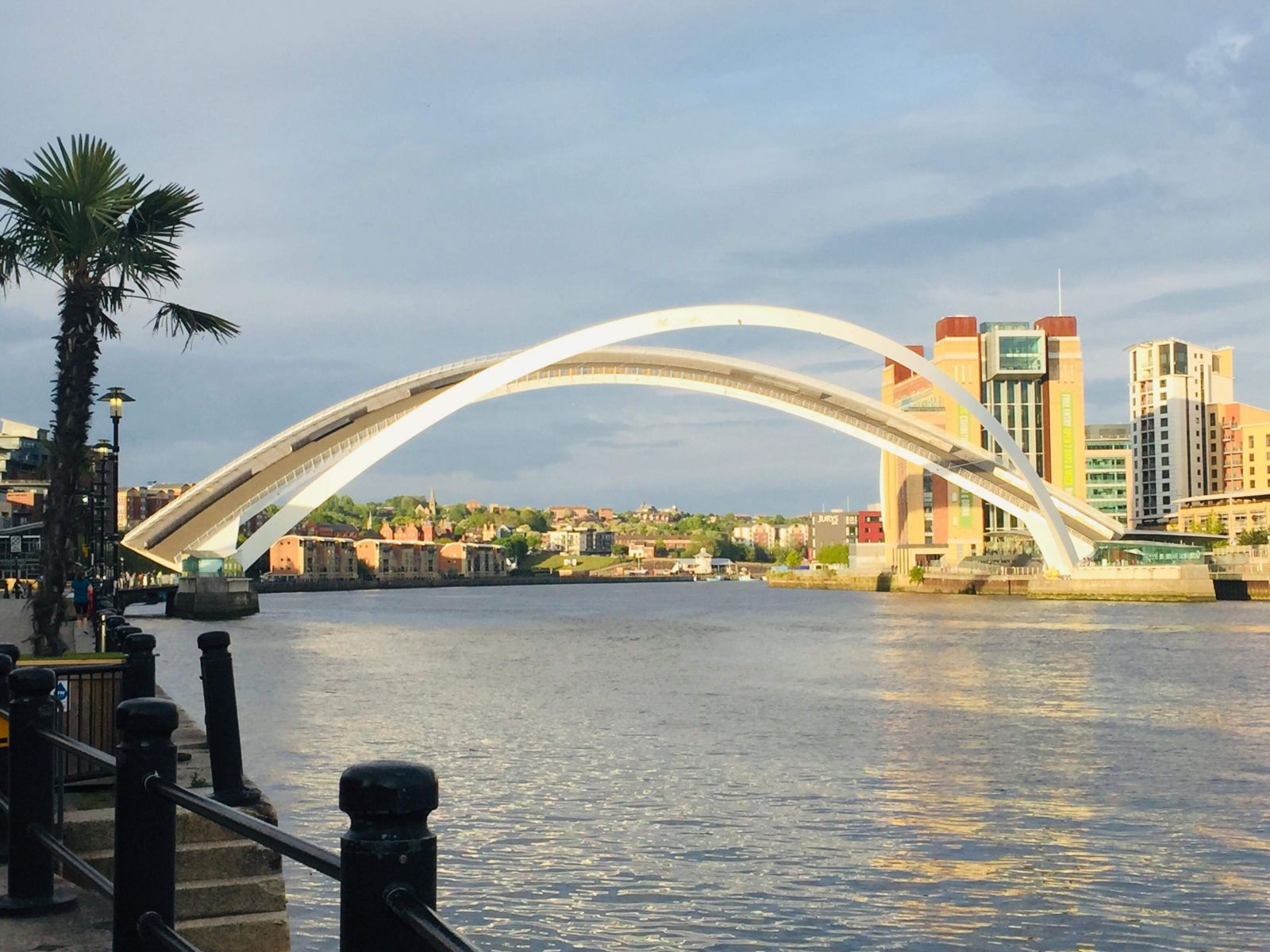 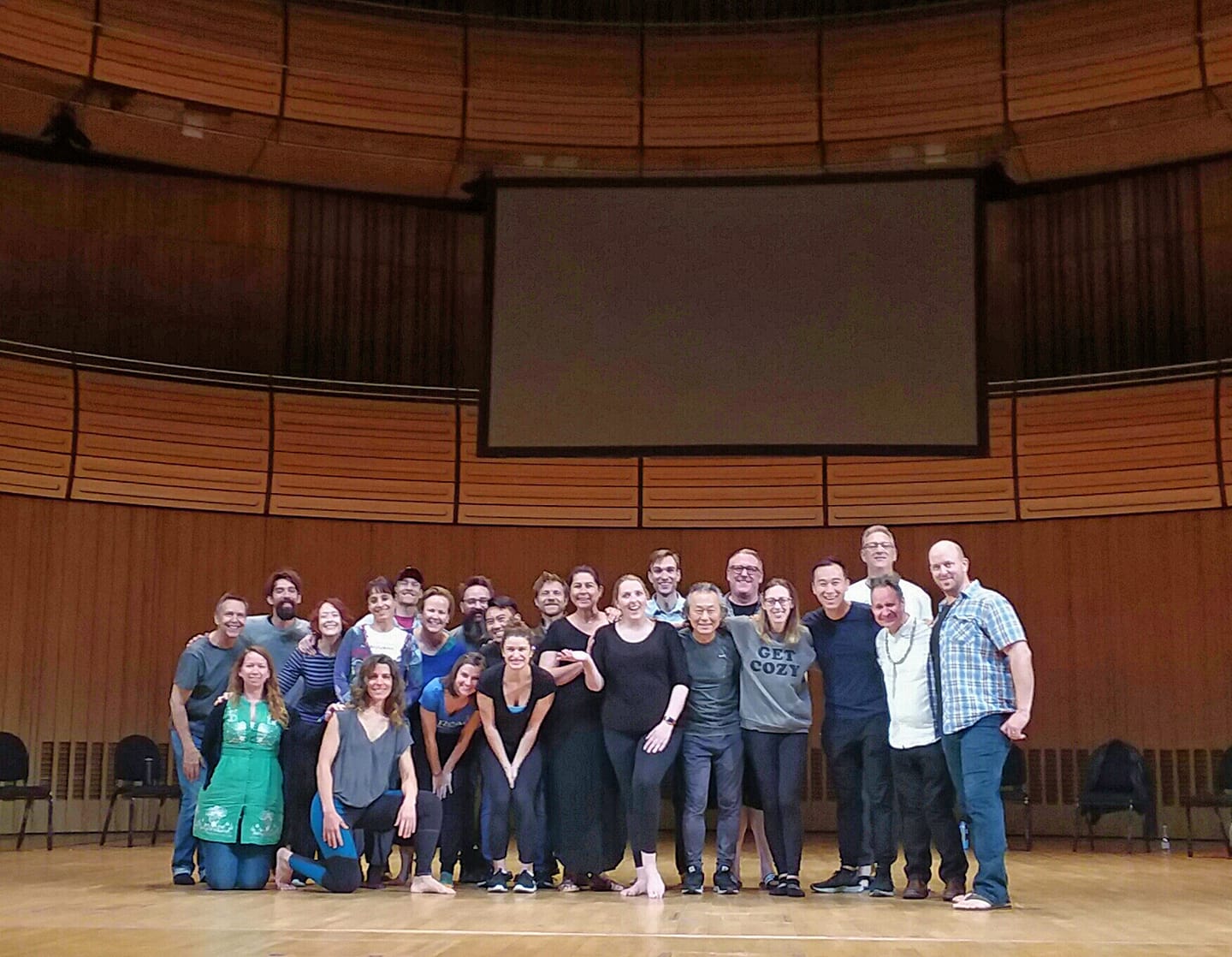 On stage at Sage Gateshead with Peter Sellars.

Once again, there was an outpouring of positive feedback expressed on Twitter:

Thank you! It was an extraordinary evening. You have the most exquisite voices and the staging & acting was so moving that it brought tears to my eyes. It made the piece so very human - full of pain & shame, and tenderness & compassion. Thank you for coming to the north east!

Thank you @LAMasterChorale for such a magnificent performance @Sage_Gateshead. It was truly wonderful and moved me to tears. Stunning. https://t.co/TVoV8NX16l

Thank you for a fabulous performance tonight @LAMasterChorale. It was sublime.
So grateful and thrilled that you visited @Sage_Gateshead.
Please come back soon! https://t.co/OZhAMMqyD9

"Every live performer has to bring some degree of physical expression to their music: Sellars takes this to an extreme, and by doing so enables the musicians to dig deep into themselves to find a heightened emotional connection with the music."
Bachtrack

It was then time to depart the United Kingdon for France for a performance at the magnificent Cité de la musique at the Philarmonie de Paris on May 27. The hall is located in the the Parc de la Villette in the 19th arrondissement and was breathtaking both inside and out, striking awe in the company as it walked to rehearsal, and a great deal of excitement once on the stage. 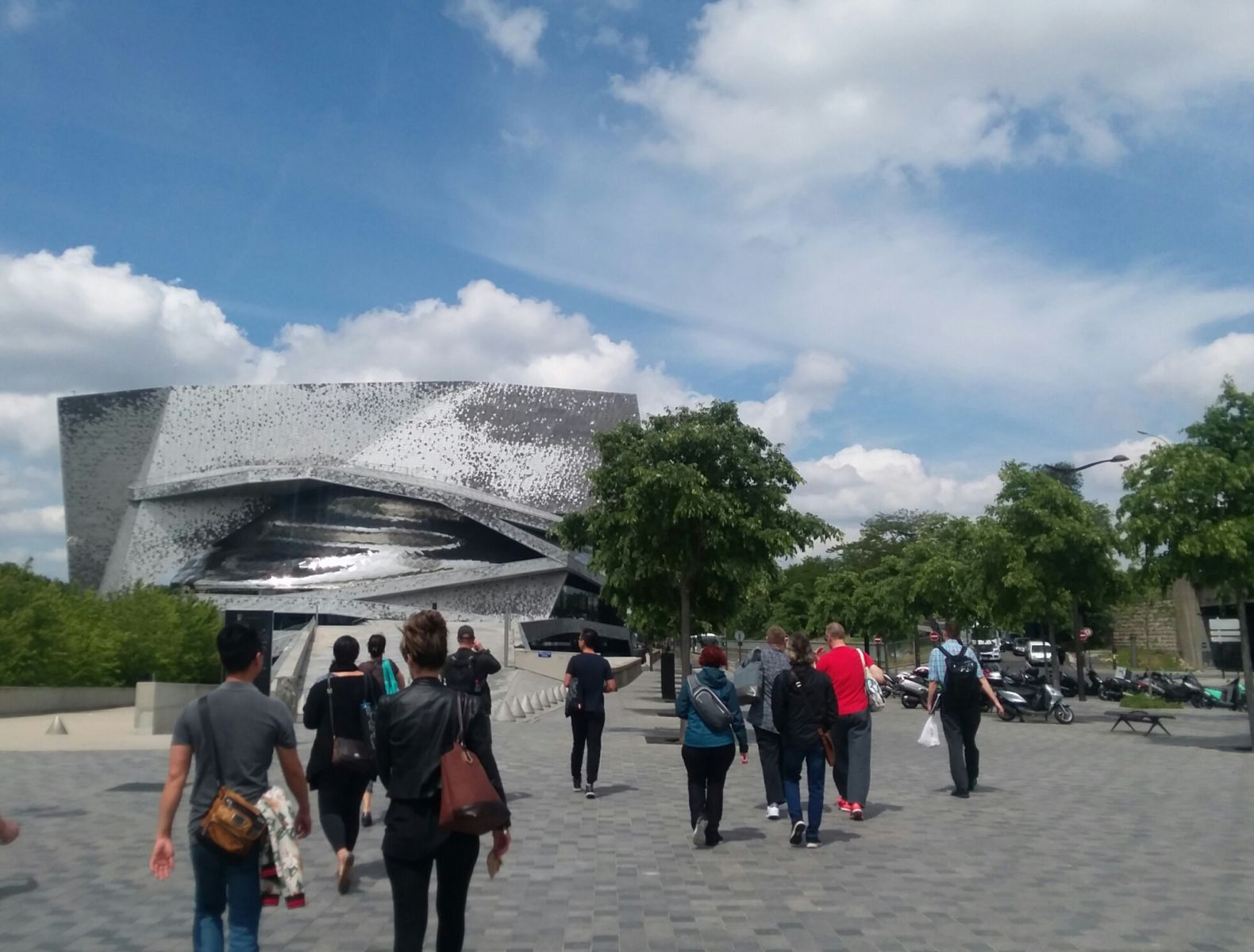 The company walking towards the Cité de la musique. 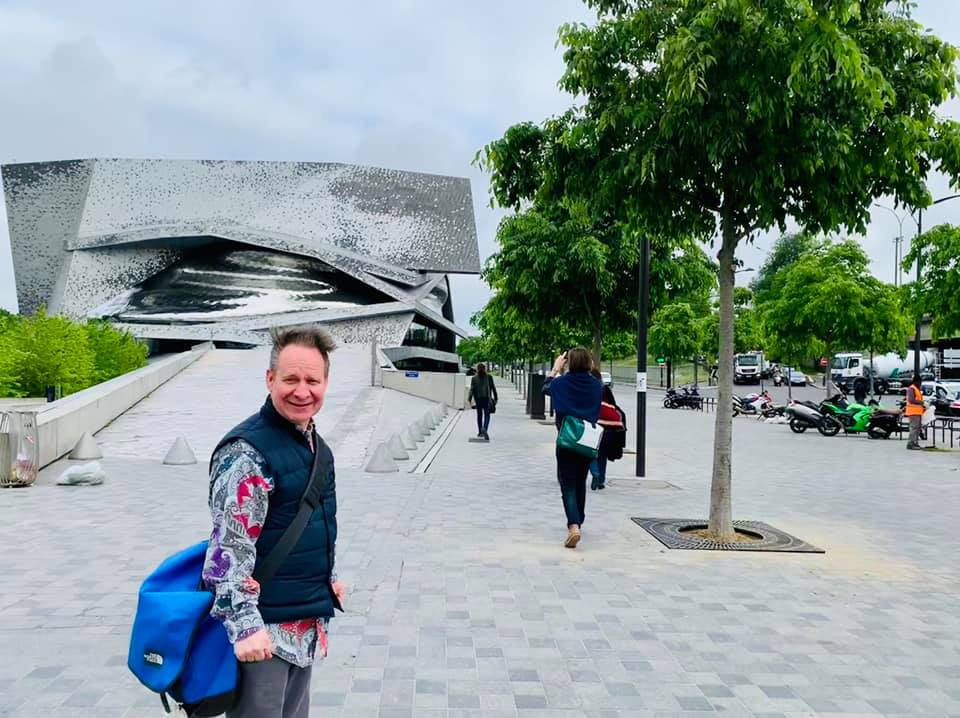 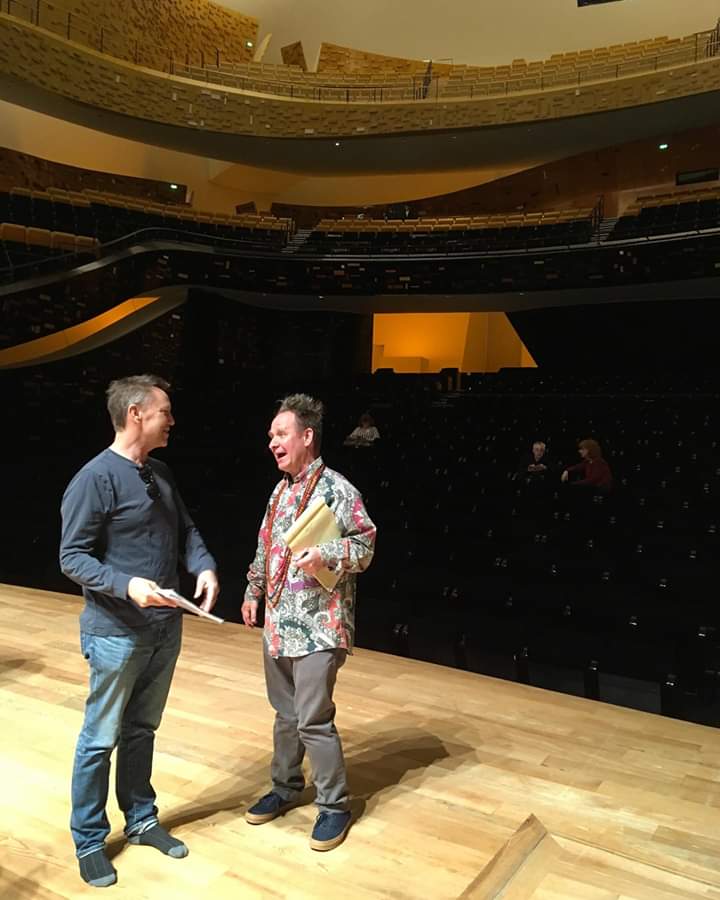 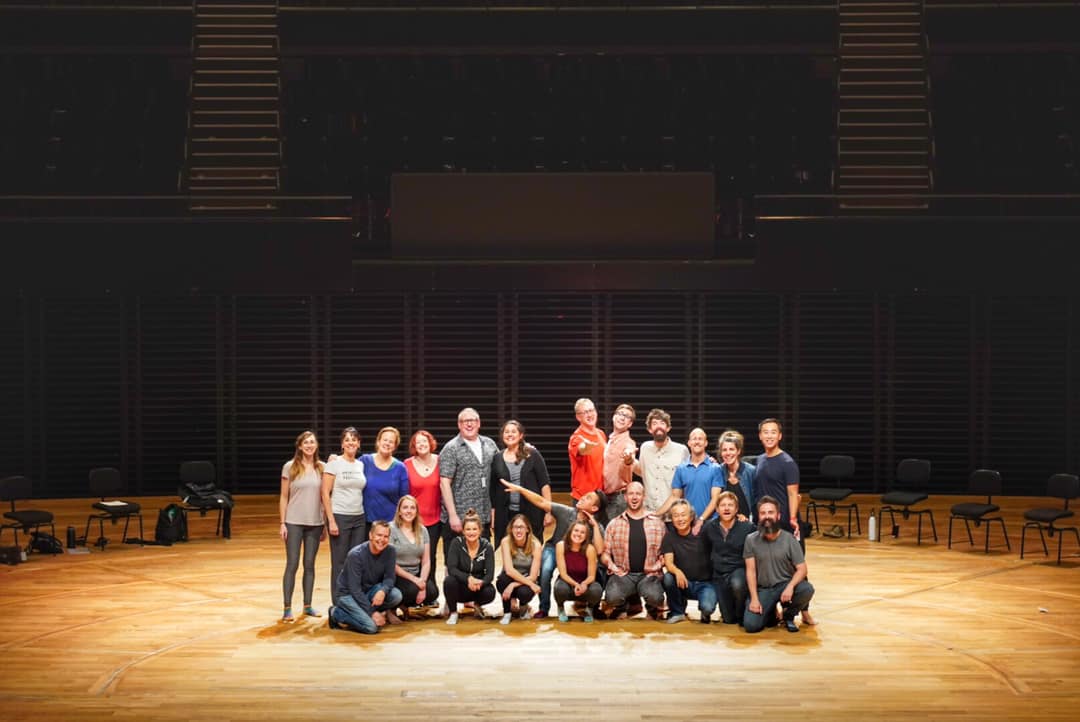 On stage at the Cité de la musique.

Prior to the performance, Peter Sellars and Grant Gershon took part in a meeting event hosted by noted French journalist Fabienne Pascaud. The near-full hall meant that there were audience members on every level, including the upper sides of the hall, offering a unique point-of-view of the stage as seen in this photo taken by a member of the audience. 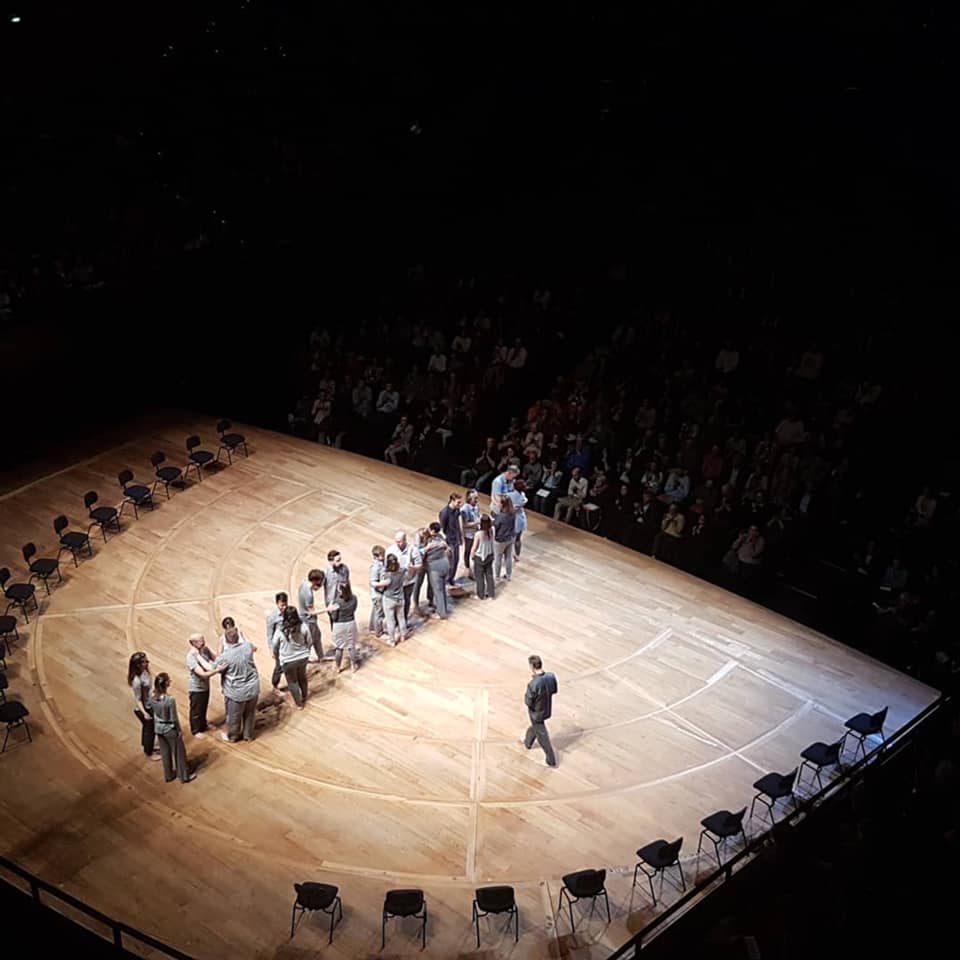 Photo: @klariscope
The performance was enthusiastically received, with the applause extending to several curtain calls for the company and Sellars, and reaching a rhythmic crescendo conveying praise and respect and engendering smiles from the singers brighter than the Eiffel Tower light show!  Backstage guests included composer Kaija Saariaho and there was a palpable feeling that something formidable had just taken place.

The Paris audience also took to Twitter to express their feelings about the concert:

Last monday, from Helsinki to @philharmonie, for an amazing singing / acting performance by tremendous @LAMasterChorale in these #lagrimedisanpietro made so close to us by Peter Sellars huge talent! A big big evening! pic.twitter.com/faI5zVH0ew

Although there was not a lot of time in Paris, the singers and members of the company did manage to see some of the sights, including visits to Notre Dame, Sacre Couer, and the Eiffel Tower before it was back on the plane and back to the United States. 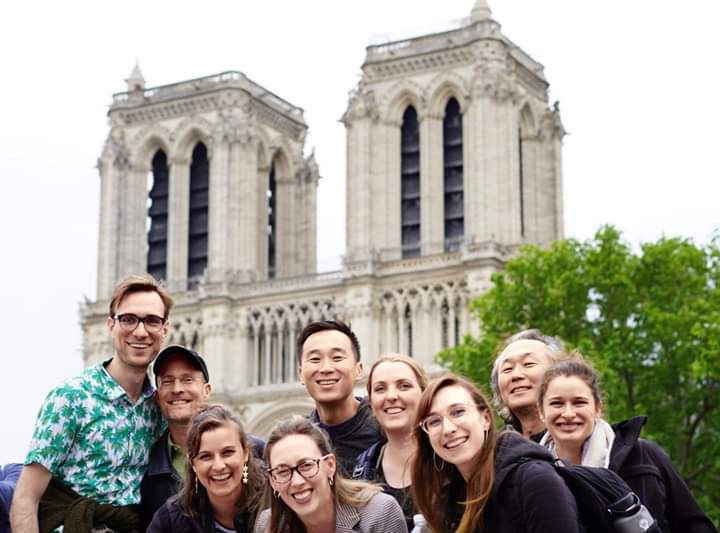 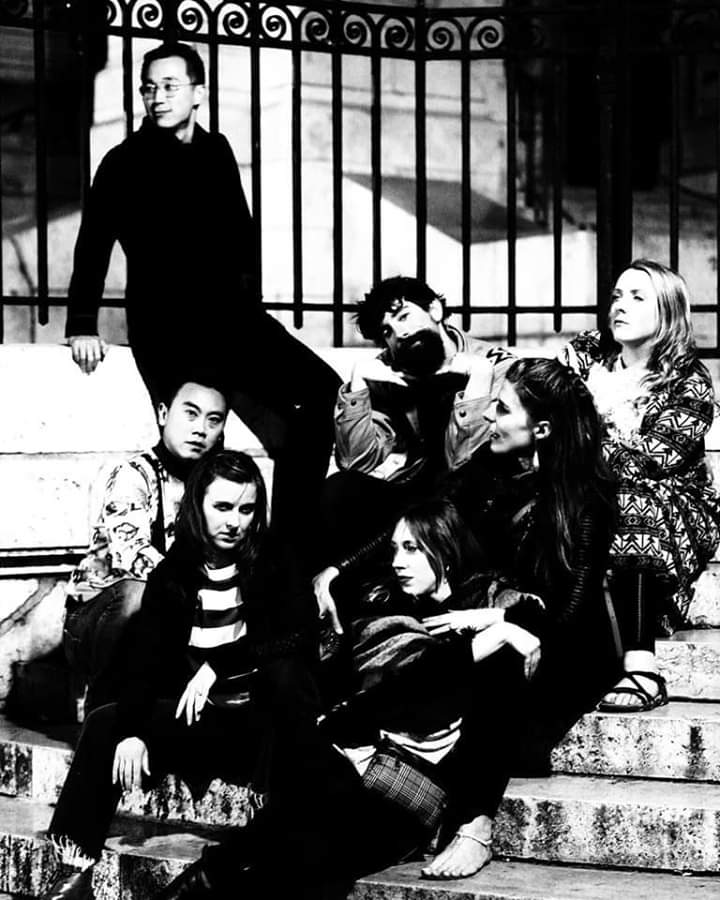 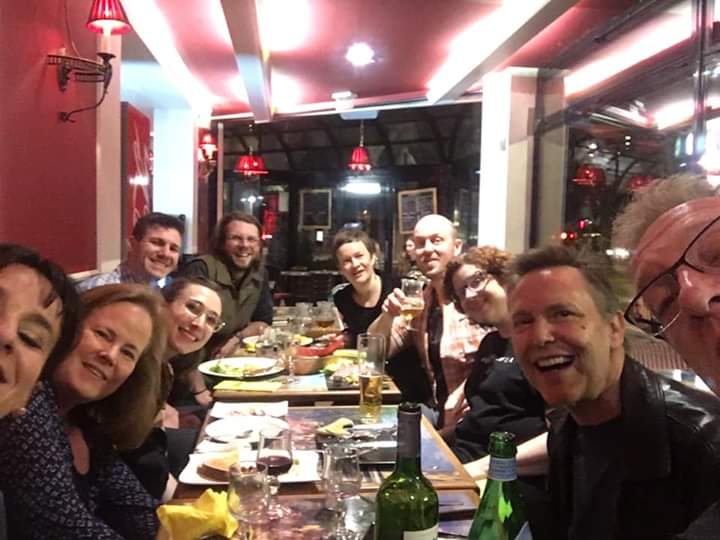 The tired but elated company then made its way back to the States for the final performance of the tour in Santa Fe, New Mexico presented by Performance Santa Fe at the Lensic Perfomring Arts Center. The performance was previewed in both The Santa Fe New Mexican and The Albuquerque Journal. 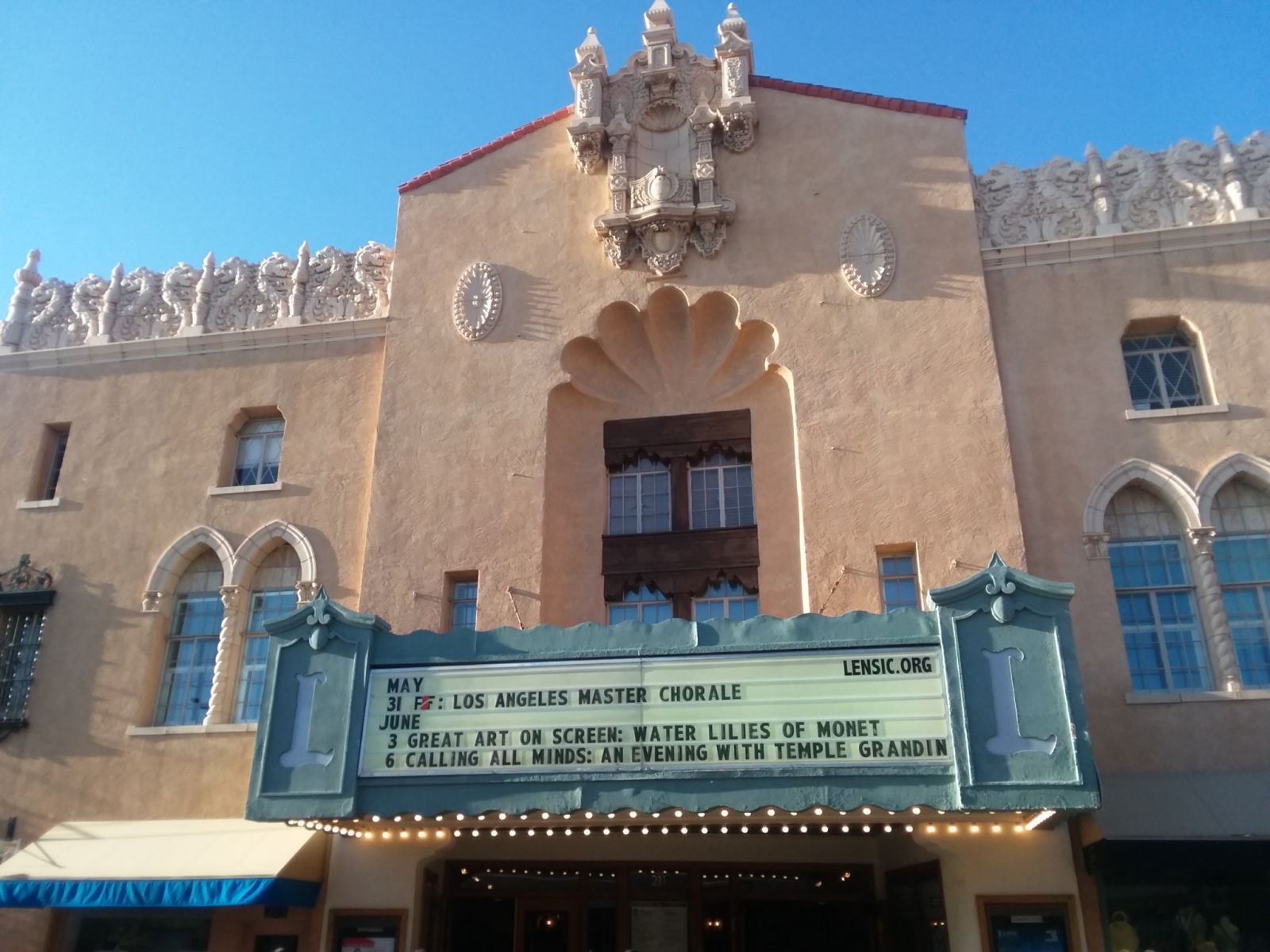 In contrast to the Philharmonie de Paris space, the beautiful Lensic proved to be an exceptionally intimate performance space. The feelings expressed in the work seemed amplified with many in the audience moved to tears. With many people from Santa Fe Opera and the Desert Chorale in attendance, and also more friends and family of the company, it was yet another emotionally-charged, expressive, and memorable performance that recceived a standing ovation. And with that, the May tour came to an end. 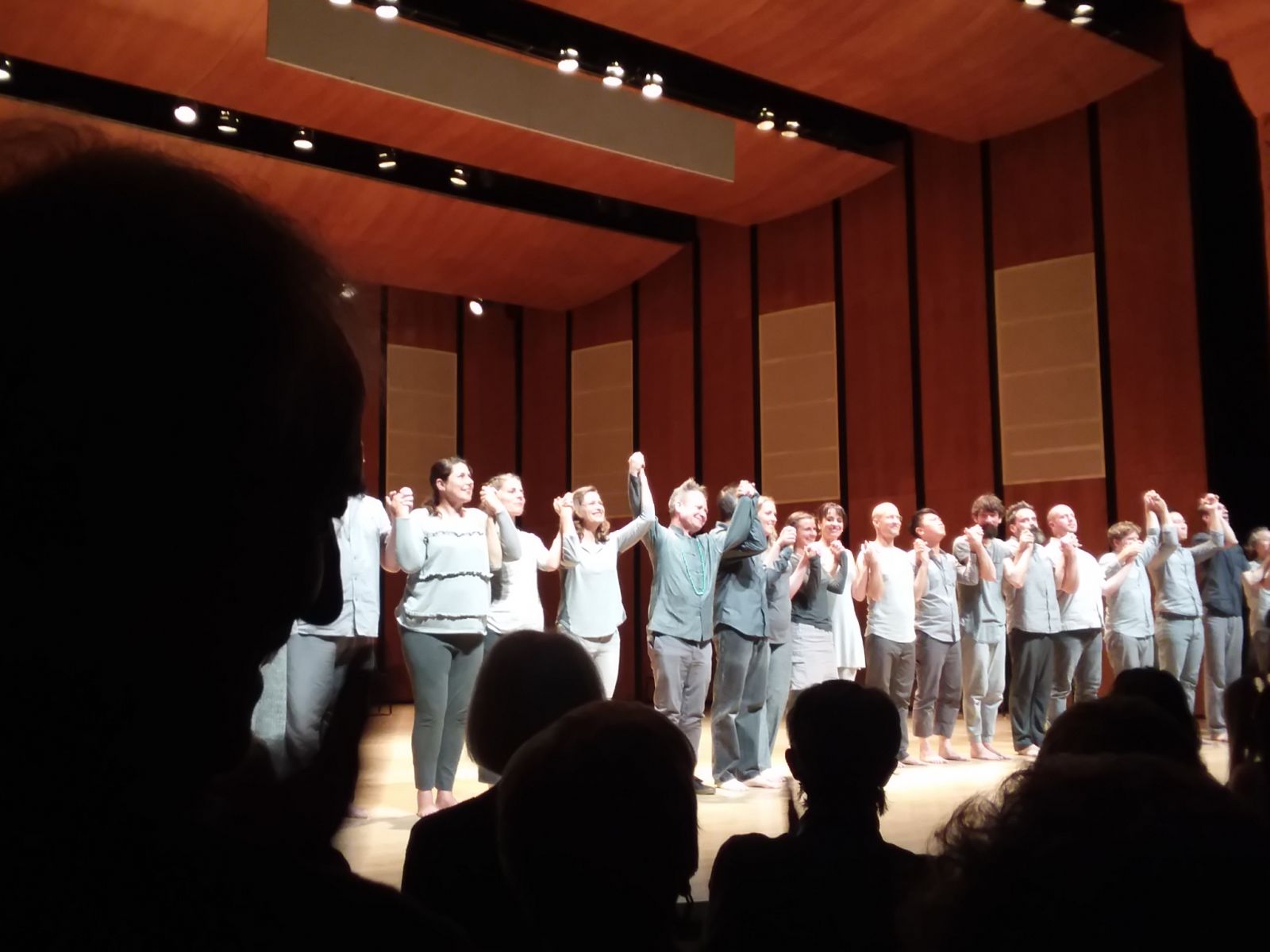 Standing ovation at the Lensic.

Congratulations to Grant Gershon and the LA Master Chorale on their powerful performance tonight at the Lensic! Over two dozen Santa Fe Chorale Board Members, Trustee Emeriti, and Staff were in the audience. Bravi Tutti!@LAMasterChorale @PerformSantaFe pic.twitter.com/j62OaHVcwT

Touring can be a combination of exhilaration and exhaustion. One of the things that brightens the company's travel days is bass James Hayden's leopard-laden return travel outfit. Not only does it make his fellow company members smile, but at 6ft 4in, James is hard to miss, eliciting lots of smiles and amused gazes from fellow passengers. Here he is pictured posing in Paris' Charles de Gaulle Airport.

The Lagrime di San Pietro company's next tour dates take place July 20 & 21 when it will open the prestigious Salzburg Festival in Austria. This is followed by a performance in Ingolstadt in Bavaria on July 23. Dates for the 2019/20 season continue to be announced and can be viewed on the LAGRIME TOUR PAGE.

The May 2019 Lagrime di San Pietro touring company was:

The Los Angeles Master Chorale production of Lagrime di San Pietro is made possible with generous underwriting from The Lovelace Family Trust and is dedicated to the memory of Jon Lovelace in honor of the special friendship he shared with director Peter Sellars.